The Lowdown on Paternity Leave 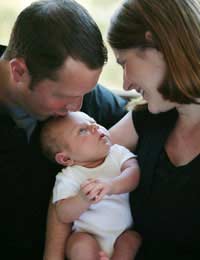 Employee fathers are becoming increasingly willing to equally share in the responsibilities of caring for their newly born offspring, but are employers as eager to encourage them?

Employed new fathers in the United Kingdom are entitled to a minimum of two weeks paternity leave once their child is born. This can be taken anytime from the date of birth up until eight weeks afterwards. Depending on the generosity of your employer, you may be offered longer or a more flexible working arrangement.

During this leave period you are entitled to the statutory paternity pay, which is basically the same as the Statutory Maternity Pay (SMP). This means a weekly allowance of £135.45 or 90% of your gross weekly earnings, depending on which is lower.

In order to quality for paid paternity leave fathers must first satisfy these factors:

In order to qualify for paternal benefits that you must supply written notice to your employer at least fifteen weeks before your baby’s due date.

This standard leave allowance was first introduced to the UK in 2003 and, in these socially evolved times of equal parental responsibility, widely seen as being long overdue. Even so many commentators believe paternity leave to be still unsatisfactory. At present, British fathers have the most unequal parental leave rights in Europe. The two weeks for fathers and fifty-two week allocation for mothers is seen by many as being somewhat imbalanced, and has lumbered British fathers with unenviable claim of having the most unequal parental leave rights in Europe. Finnish fathers, for example, are entitled to six weeks paid leave.

Many feel that the current paternity leave does not reflect the more modern attitudes of fathers towards the care of their newborn babies. There has been a major shift from 20 years ago, when 52% of surveyed fathers were surveyed as believing it was their duty to be the breadwinner while women stayed at home to look after the family.

Recent years have seen proposals being put forward to raise the allowance to four weeks and, as part of the Additional Paternity Leave scheme, even six months. But these have come and gone. The latest call to extend the leave was rejected by the government in 2007 on the grounds that the current two-week period already struck ‘the right balance’. And although an increase in paternity leave and contract pay rate would encourage fathers who want to play an active role in the early stages of their child’s life, such a move would negatively impact on their employers, with the smaller firms being particularly affected.