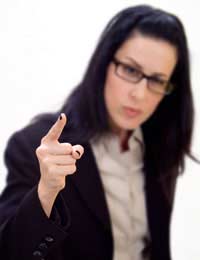 Bullying is not acceptable in the playground nevermind the work environment. Nobody should have to put up with bullying and action needs to be taken to combat the perpetrator.

Combat the Bullies by Speaking out

If you believe you are being bullied at work then don’t suffer in silence, get the matter out into the open. It is important that you don’t try to cope on your own. You will feel better just by speaking to someone about it, such as a sympathetic colleague or a friend. As well as providing words of support, if you explain the treatment you have suffered they will likely help ascertain whether you are justified in feeling victimised and should take the matter further.

If you feel strong enough to do so, then your first step in dealing with the problem should be to confront the bully in question. It’s possible that the bullying is not deliberate and if made aware of the affects of their behaviour then the perpetrator will likely apologise and put an end to it.

Before confronting the bully think about what you want to say beforehand. Stay calm and polite, and don’t affect too casual a manner otherwise they might not take your grievance seriously. Tell them that you find their behaviour unacceptable and request that they stop. Bullies are not keen on being confronted, particularly if done in a calm and considered manner. And often this is all that is required.

If you don’t feel up to confronting them then you could ask another colleague to do it for you. Either way a direct approach is certainly the best. You shouldn’t resort to sending them note or email explaining your feelings.

In addition to confronting the bully it is also highly recommended to keep a detailed diary record of the various incidents, including times and dates, as well as names of witnesses. Individual episodes may seem trivial in isolation but collected together in a diary format often create a disturbing picture of sustained pattern of bullying. By compiling this it will not only help hit home to you that you are not overreacting and something must be done about it, but it will also provide valuable evidence when the bully is confronted.

Further Help in the Office

With this type of ‘indirect bullying’, victims are deliberately made to feel socially isolated, so that they are left feeling alone too scared to speak out to anyone. By talking to someone about it you are effectively breaking the bully’s spell. If you feel so isolated from your colleagues that you can’t speak to them then there should always be members on hand in your organisation who will be able to help you.

Your employer has a ‘duty of care’ policy to help you with any bullying complaints. There are a number of methods you can follow if you have been unable to resolve a bullying problem by confronting the culprit. Firstly you can seek informal advice on dealing with the matter from somebody in your office human resources department, your manager or a harassment advisor, if they are available at your place of work.

If you are a member of a trade union then you can also speak to an official safety representative in confidence to tell them what has been happening. They will offer the advice and support you need and will be willing to address the issue directly by speaking to the bully either with you or on your behalf. They can also help you with a formal complaint if it comes to that. If you are not a member of a union then you have every right to join one.

If you are unable to solve the problem informally then the next stop on the trail of resolution is to follow your organisation’s grievance procedure. Having issued a formal complaint the first stage of the procedure is to seek an informal resolution with the aid of your immediate manager – or the next most senior person if they are the subject. If this proves unsuccessful then the case will move on to the full formal stage which will include a written statement followed by a meeting and then an appeal.

The grievance procedure is a necessary forebear to any formal action taken outside of the work environment, such as taking a claim to an employment tribunal. Such a claim must be issued within three months of the last bullying incident and only be pursued if well advised to do so.

What can you do about Harassment?
Share Your Story, Join the Discussion or Seek Advice..
I have been bullied for approx five years if not more at work. The problem is when a manager is the ring leader it is hard to not only prove but stand up against the supporters or click as I have come to call it. To leave a job you love is heart breaking but I must. I have been off work for five months now with stress and had two different sets of councillors who have been a complete God send to me. They have helped me to believe in myself and helped me to have a voice. I can beat bullies and so can anyone else given the confidence to do so. Remember bullies are cowards.
see - 12-Jun-13 @ 2:44 AM
I was bullied in the work place, and it was really bad, my supervisor bullied me and other staff members and I was even stopped from using a asthma inhaler and when I complained to my Managers they just said so what and let him do exactly what he wanted to do to make my life hell along with a few other female workers, every week we were given different jobs to do and everyday I went into work this bloke would cause problems I had several clinics to prepare for the following day for clincis and every few minutes I was told hurry up and finish and get out and finish the work that this person had been told to do himself, everytime I went out the office he would follow me stating he was I charge and if I didn't get back to work he would sack me or cause more problems, I would meet friends at break time and he would follow us up to the canteen then state that we were talking about him and what were we saying a few times he would sit right behind us so he could here what was said and then still comments that we were talking about him, this went on a few years as I could not leave as I tried to get another job, in the end I put a grievance in against him, and as soon as I did both him and the managers made my life hell it got so bad that I went off work sick of and on for nearly 2 years because of stress in the end I had to leave my job (a job that I really liked) one of the bosses her policeman boyfriend to state that I hassled her but this is untrue and now I have had to have talbets and counselling to cope with this, I have also been thinking about ending it all but I live with my elderly mother and also feel I will never be able again to go to work,
dont have one - 5-May-13 @ 10:50 AM
Title:
(never shown)
Firstname:
(never shown)
Surname:
(never shown)
Email:
(never shown)
Nickname:
(shown)
Comment:
Validate: