Home > Working as a Team > Creating an Effective Team 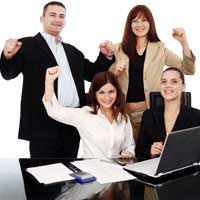 Creating an effective team is a tricky task that demands care and attention, but the effort is justified by the success it yields to both the organisation and the individual.

The Difficulties of Team Building

With all the respect, authority and power it commands, being responsible for a managing a team should be a great job. However, the job of creating an effective and harmonious team can actually prove quite a headache.

Team building is so problematic because people are difficult. As independent entities they have their own temperaments, moods, motivations and working methods and as such uniting them can be formidable task.

What Makes a Good Team?

In essence, a good team is a cohesive unit of people all working together towards a common goal. That’s all well and good but if, for example, your team is an unproductive, directionless mob, troubled by complaints, arguments and apathy then what is it this so-called ‘good team’ has that sets it above and beyond yours?

This good team works effectively because it:

How to Begin Team Building

So how do you go about achieving this dream team? Firstly you need to think about the fuel that keeps a team ticking over - motivation. What actually motivates people in the workplace?

Beyond the basic survival motivations of keeping yourself fed, watered and sheltered etc, people are motivated by things that improve their mental well being by making them happier and more positive. In the workplace these ‘motivators’ could include team spirit, goals and being praised for you good work.

You need to think about how you can introduce these and other motivating factors into your team activity. For example, you could introduce regular team meetings where individual achievements are highlighted. The meeting could also be used to collectively map out future plans for you team. This would not only be a way to introduce motivational goals but also make the team members feel that they are involved in the running and successes of the team, and that their views are respected. There a few things more de-motivating than having no input whatsoever and having a manager decide everything on your behalf.

Finally, you could help instil some team spirit by organising a regular team social activity such as volleyball. Team activities outside of the workplace are also useful in cultivating a more focused team unit.

A good way to clear the slate with your team and start afresh with new goals and philosophy is to organise a social team building activity. This should suit all members of the team and could be an activity weekend, a camping trip or a trip to a team building workshop. What is important is that it encourages your team to get together outside of work, get to understand one another better and forge new alliances and, of course, have fun.

One of the biggest difficulties faced by a team manager is in dealing with such a broad spectrum of personalities. However, rather than moan about it, a good team leader will use this to their advantage. By recognising the different strengths and behaviours of each of your team members you can delegate people for their ideal roles and thereby use the diversity to create a tighter more well balanced team. Understanding a person’s tendencies also enables you to both predict and deal with them more effectively.

For example, one member of your team might be a real perfectionist who is great with the small details but who needs direction and to be shown their appreciated. Another might not have much initiative and a ready supply of ideas, but who is a real social marvel and great supporter of people. And there might be someone who is valuable as a problem solver but not so good at getting jobs done.

You can assess the personalities of your team members by studying them or you can employ the services of a specialist questionnaire.

As a final guide, here are a few ideas worth bearing in mind when attempting to craft the perfect team:

Questionnaire: Do You Have Good Communication Skills?

How to be a Good Team Member

How Sport can Improve Team Relations