Dealing with the Office Victim 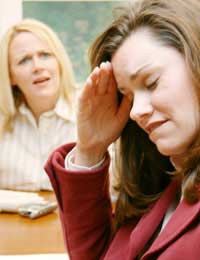 Dealing with people is often the hardest part of a manager’s job because no amount of training can prepare oneself for the most troublesome employees. One such type is the office ‘victim’.

Dealing with Difficult Members of the Team

Training can teach a manager to coach, inspire, motivate, reprimand and reward their staff, but only if they behave like staff should, or are supposed to – that is reasonably. But there’s always a member of staff who resists these textbook efforts to inspire their talents and suppress their unruly tendencies.

That is the great problem with people – sometimes they can be so unpredictable. However much you organise them into orderly categories, there’s always someone that sneaks in through the fence and upsets all the carefully laid plans.

Unless you are blessed with that enviable innate skill that enables you to make a friend and loyal servant out the most defiant and disorderly, dealing with a difficult member can be a major headache. Not only did your training not prepare you for this troublemaker but they’re disrupting all the people that you were ready for.

The key to managing a difficult staff member is to recognise their disruptive attitude, communication or behaviour as early as possible and then deal with it. If given space, negative behaviour will thrive and set about damaging the positive efforts of the rest of the team.

Rather than, through being on receiving end of an unfortunate incident, be seen by everyone else as a victim, this type of office malcontent sees themselves as the victim. Fate will deal them a rum hand at any inopportune moment, and as a result they can’t meet a deadline, complete an assignment, deal with a problem etc. They have to come into work late for because of some problem, leave early because of another. This character is unreliable, irresponsible, selfish, and ruled by the law of ‘can’t’.

Damaging Effects of the Office Victim

The victim’s behaviour is frustrating in its self but it also has a detrimental effect on their colleagues. Inability to fulfil responsibilities and failure to achieve their goals means the burden falls on the whole team. Whilst some people are drawn in by their ‘poor me’ routine and feel sorry for them and help them out, others are not so gullible, and merely shake their heads in helpless frustration. The effects of the office victim can have a damaging impact on the morale of the team.

Dealing with the Office Victim

To help solve the problem you need to start by getting the colleagues of the victim to stop helping them out because by indulging them the situation is being made worse. A large part of their act needs a responsive audience to survive. Everybody in the team has their own problems but they manage them well enough not to allow them to interfere with their working life. If a problem did infringe on their work commitments then would the victim offer their help and support? No, they’d probably have an excuse.

The victim may be burdened with genuine troubles or they may be conjuring up imaginary problems to attract sympathy and deflect responsibility, either way you should ask to speak to them privately and recommend special counselling. Explain how their problems are not just affecting them but the whole team and therefore you order them to seek professional support.

If they are genuinely struggling with their problems then hopefully the counselling communication will help them to deal with them, and if the problems are a sham then it may make them realise what effects their behaviour is having on their colleagues.

Another option is to introduce a goal and award scheme into your working programme that will either motivate the office victim into greater work commitment or highlight their lack of positive action in comparison to the rest of the team. The scheme will give each individual team member their own targets to work towards. If successful they are rewarded and then given an improved target with more responsibility, thereby progressively increasing their skills and experience.